Assuming that a binary option trade, by its very nature, is a 50/50 wager, how exactly do customisable trade durations give you an advantage as a binary trader? Well, they don’t actually, really they don’t. And here’s why:

Binary options brokers love to draw attention to how a binary options contract can last for as long as you want it. From 60 seconds all the way up to several months. So their argument is that you can tailor your trade to suit your trading style and can get in and out of markets at trade durations that other traders can’t match. In other words binary options are some kind of surgical tool with which to take advantage of short term swings in price action. You as a binary trader can go in, profit from a short term spike, and then go in again and profit on the reversal as the asset you are monitoring goes the other way. Hogwash. See the screen shot below. 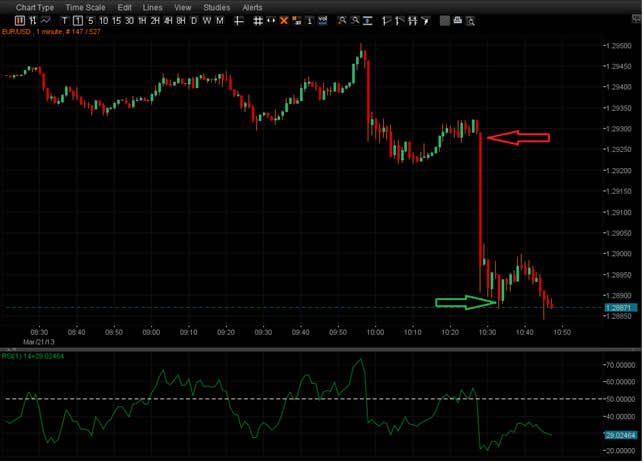 This is a screenshot of EUR/USD being charted at the one minute duration, meaning that every candlestick on this chart represents a minute of trading activity. At around 10:28 AM the euro takes a huge dip against the US dollar. This drop in value was triggered by a negative German PMI report due to be released at 10:30 but don’t trouble yourselves with that now, keep it in mind because later we will be using this chart to show that trading economic events using binary options contracts further stacks the odds against you. For now just imagine that this is some random drop, not triggered by any fundamentals.

If trading on the 60 second time frame, in order for you to have profited from this drop you will have had to get in at exactly 10:28, or anything up to a minute earlier in order to take advantage of the drop. If you got it wrong, even slightly, you end up losing the trade. Now if you were trading at a longer duration, say 5 minutes, you’d have had to get in allowing enough time for your option to expire with the price lower than you did at entry. So, if you got in at 10:23 then you probably lost this trade. 10:24 you won. Anything up to 10:29 you won. Anything later and your profits are starting to look sketchy, even with such a pronounced drop.

Not to mention that the size of the drop doesn’t earn you more because “in binary options you profit from the direction not the magnitude”. So for such a big drop you still get your measly 75% on a 50/50 trade and you have to get the timing absolutely perfect in order for it to pay off.

Also keep in mind that even though binary options brokers claim to give you control over when to enter these trades (Spotoption’s platform provides you with an “Option Builder”) this is not quite so. The binary options offered by brokers start and end at a preset time, every minute, or ever five minutes etc, you can’t shift this entry or exit to the left or right, it’s like waiting for a train, you can only get on when it arrives. And as far as the “Option Builder” feature goes, it really isn’t all it’s cracked up to be, most of the time when you try and tailor your trade durations you won’t be allowed to enter the trade, especially when important economic data is due to be released.

Do you see what I’m trying to get at here? This “simplified trading” that binary options brokers have devised is really the simplest way possible for them to ensure that you loose. We have the 50/50 nature of the trade and the 75% return ensuring that the law of averages is in their favour. Then there’s the fact that, unlike what they’ve been telling you, you don’t just have to correctly forecast the DIRECTION, you have to make sure that the rise or fall takes place within a certain WINDOW. These are two radically different things. Correctly predicting an up or down movement is way, way, WAY easier than having to know in advance where that rise or fall should take place within a 60 second/5 minute/15 minute window.

If you were trading Forex, according to the above chart you could’ve sold or gone short (the equivalent of a PUT) at 8:00 that morning, and if you had enough margin in your account to guarantee your trade (cause for a while there it goes up instead of down) you could’ve left it open for as long as you wanted, closing it at 9:30, 9:40, 9:50, all the way up to 10:50, and you would’ve won. Not only would you have won, but you would’ve earned a hell of a lot more than 75%, especially if you used leverage. In a similar situation in Forex trading, using maximum leverage, this one price move could’ve earned you thousands. Of course I don’t recommend over-extending yourself in this way but I’m trying to illustrate that binary options brokers tie your hands, stack the odds against you and don’t pay you much when you win. When trading Forex you choose when to enter and you choose when to exit, the hype around 60 second trades in binary options is such a joke, in Forex you can open a trade and close it in a few seconds of you wish. This is called scalping and scalpers are far better equipped to go in and out at will, profiting from small moves repeatedly, making small profits with each trade that add up over the course of the day. You don’t have that control with binary options, you simply don’t. I think myth number four has been debunked. Let’s move on.