EZ Trader is undoubtedly a popular and successful binary options trader, which has recently attracted headlines for its high profile sports sponsorship deals, the latest being an agreement to sponsor the renowned English team Everton F.C.

However, in a decision announced yesterday, the broker’s regulator, namely the Cyprus Securities and Exchange Commission, has imposed a €10,000 fine on EZ Trader, in relation to its briefly suspended license last year. As we had reported in November 2014, CySEC had then suspended the financial services license of EZTrader’s parent company WGM Services Ltd due to what was then described as “suspicions of alleged violations” of three separate sections of the jurisdiction’s Investment Services and Activities and Regulated Markets Law.

More specifically, the three sections that the company was alleged to have violated pertained to: Operational requirements – Clients’ funds, Safeguarding of clients’ funds, Own Funds – on the capital adequacy of investment firms and CIFs large exposures – on large exposures.

The Cypriot watchdog had pointed out regarding the rationale of its decision back then that it “was reached taking into serious consideration that the above alleged violations may possibly endanger the interests of the clients of WGM Services Ltd and the operation of the capital market.”

The temporary suspension of the license was revoked and the license was restored in late December last year, after the regulator was satisfied that the company had complied with all the relevant legal provisions. However, yesterday’s decision for the imposition of an administrative fine was taken because, according to CySEC during the one-month period while the license was suspended the CIF WGM Services had continued the provision of services through its brands EZ Trader and EZInvest, when it has no authorization and was thus not allowed to do so.

According to the relevant legal framework in Cyprus, a CIF authorized company has to suspend its services for the entire time when its license is suspended by the regulator, until the regulator notifies the CIF that the suspension is over and it can continue to do so.

As mitigating circumstances when determining the height of the fine, CySEC cites in its announcement that it took into account the fact that eventually WGM complied with the legal provisions and its license was restored, as well as the fact that the CIF had also informed the regulator that it has already taken the necessary corrective measures in order to rectify the access problems it was facing for its domain name www.eztrader.com.

In another decision by the CySEC board which was also announced yesterday, the Cyprus Investment Firm TTCM Traders Trust Capital Markets Ltd, which provides online retail forex brokerage services under the domain name www.traders-trust.com, was also fined €5.000 because in September 2014 it had provided false information to the regulating authority regarding the increase of its own funds. The low level of the fine is explained by the fact that CySEC took into account as mitigating circumstances the fact that the company has eventually given sufficient and documented information about the increase of its own funds and that it has never breached any other legal provisions of the regulatory framework in the past. 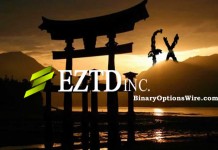